Development of Video in Perspective

Development of Video in Perspective

The camera’s predecessor was the so-called camera obscura, which was developed to project a subject on a surface from which you could then draw it. These fixtures could be sizes from small boxes to entire spaces one stepped into.

The development of the camera was based on the camera obscura device, and the first models were wooden boxes with a lens on one side and a piece of film on the other.

At the beginning of development history of photography in the first half of the 19th century, many new inventions came into the field of chemistry behind recording and development, but camera development only began to gain momentum in the late 19th century, as the photographic film had now become so practical and useful, that everyone could use it. Subsequently, various small cameras began to emerge as photography became more prevalent among ordinary people. 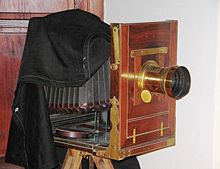 Camera from the 1800s for studies

Photographs of moving images appeared in their earliest form in 1887, when Eadweard Muybridge photographed a horse to determine the question of whether the horse at any point has all legs free of the ground at the same time at a gallop; it has it, it turned out.

This first detection of movement was made with a long series of cameras, each of which was triggered as the horse passed. In 1894, Louis Lumière obtained a patent for an actual camera to record live images. This type of camera is also gaining wide popularity with the proliferation of 8 and 16 mm film formats for hobby use.

With the advent of television in the early 1900s TV camera, which in its basic structure is similar to a film camera, but the film is replaced by an iconoscope tube, a sort of tube which captures images instead of showing them.

The early TV cameras required a lot of light and were therefore equipped with large lenses compared to other contemporary cameras.

The technique in both film and video is developed throughout the 20th century. Auto-focus, auto-exposure control, and auto-feed are invented, and in general, cameras become more advanced and perform better in image quality.

In the early 1990s, a major technical upheaval with the development of the digital image sensor, which has gradually supplanted film and video tubes in almost all camera types.

The earliest video cameras were based on the mechanical Nipkow disk and used in experimental broadcasts through the 1910s–1930s. All-electronic designs based on the video camera tube, such as Vladimir Zworykin’s Iconoscope and Philo Farnsworth’s image dissector, supplanted the Nipkow system by the 1930s.

These remained in wide use until the 1980s,, when cameras based on solid-state image sensors such as the charge-coupled device (CCD) and later CMOS active-pixel sensor (CMOS sensor) eliminated common problems with tube technologies such as image burn-in and streaking and made digital video workflow practical since the output of the sensor is digital so it does not need conversion from analog tings.

Practical digital video cameras were also enabled by advances in video compression, due to the impractically high memory and bandwidth requirements of uncompressed video.

The most important compression algorithm in this regard is the discrete cosine transform (DCT), lossy compression technique that was first proposed in 1972.

The Year Of The Tiger – World In Evolution

Let us look of some aspects in the changing into The Year Of The Tiger. What to expect in the Year of the Tiger? Astrologers say the tiger denotes strength, vitality and growth — qualities that will hopefully stand us in good stead as we look to move past the...

The Truth Is coming To Earth

The truth is coming to Earth. In the 90s the invasions of Aliens was under the influence of many people, movies as X-Files, Independence Day, and others, this was all over the Internet so it must be true aliens will be invading the earth within the next 18 months and...